Traditionally, there has been a lot of emphasis on exercising and eating a balanced diet to maintain a moderate and healthy weight. However, advancements in modern technology have introduced multiple easy-to-execute and non-invasive ways for getting rid of excessive fat and achieving the ideal body. Laser liposuction and CoolSculpting are two such cosmetic and non-invasive procedures that can remove extra fat under the skin. Different technologies are used in both these processes to achieve an ideal body.

These processes share some similarities for e.g. they are more effective for people who are close to their ideal weight. But they also have their differences as well. In this article, we will draw a comparison between the working mechanism, effectiveness, and results from both these procedures to deduce which is the better and more suitable technique. So let’s take a look.

After this step, the doctors insert a small tube into the incised area and suck away the liquefied fat. The doctors then stitch up the site to prevent any infection. Laser liposuction can be performed within 60-80 minutes.

Unlike Laser Liposuction, CoolScultping is a non-invasive procedure and requires no incisions. In this process, a device is held close to the treatment area which releases controlled cooling to the fat underneath. It causes the fat cells to freeze which are then consumed by the liver and eventually removed from the body as waste. CoolSculpting sessions take 30-60 minutes.

What Results Are Obtained From Both Procedures?

Both processes are performed to remove extra fat and achieve a sculpted body. However, the timing of the results differs. 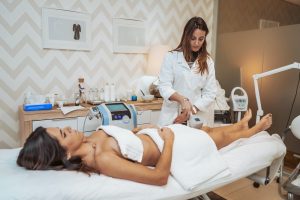 A lot of people prefer liposuction to other fat removal procedures because of its instant results.

CoolSculpting has a different mode of action. It does not suck out the fat as laser liposuction does, rathe relies on the body’s metabolism to remove the fat cells in a few days post-treatment. Hence, the results take longer to appear.

Both procedures are quite effective in removing excessive fat. Laser liposuction gives immediate results and does not require more than one session per area. On the downside, it involves minimal invasion and the body may require 2-4 days to recover. For CoolSculpitng, there is no downtime, but results take longer to appear.

This information has been brought to you by Alladerm.